What is the Digital Transition? 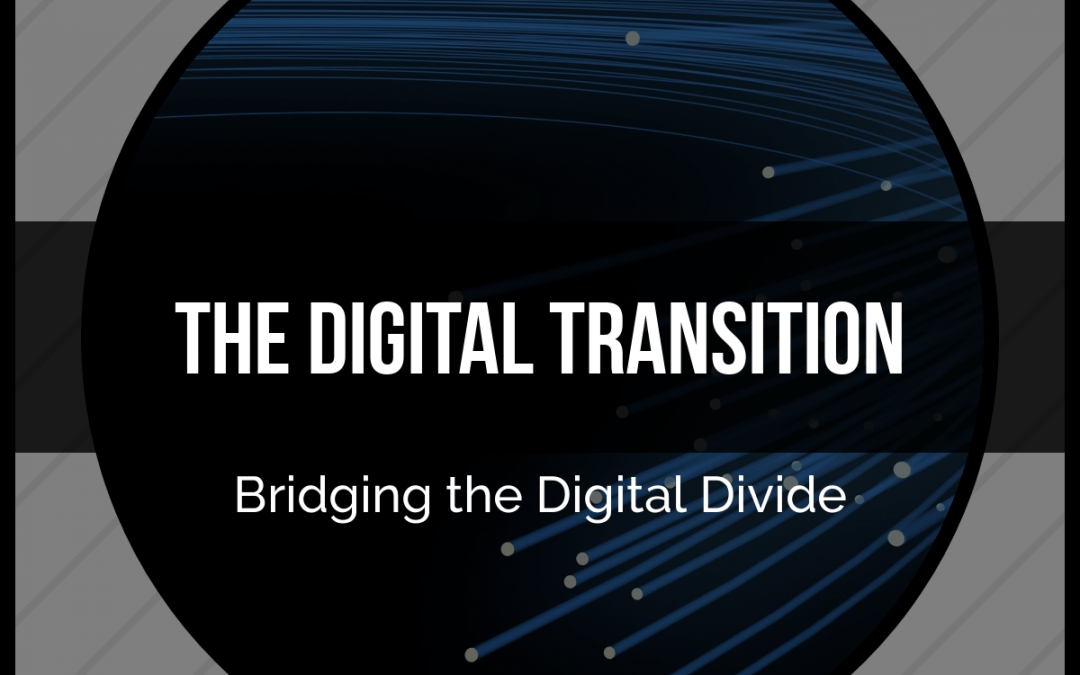 When I tell folks I am a Digital Transition Coach, I almost always need to follow up with an explanation. Sometimes it is tough being an early adopter. There are several definitions for Digital Transition, but I focus on one that serves the purposes of most small businesses I know. So, I’d like to take a moment to explain myself.

I define the Digital Transition as the process of moving from an analog-based society to one based on digital technology, processes, and conventions.

Now, you might say to yourself “but haven’t we already transitioned?”  And to that, I give a resounding “NO”   To understand the point I am trying to convey, let’s go through a brief history of digital technology.  I won’t go deep into it as there are volumes written on the subject.  But I want to highlight some specific points.

I start with the 1960s because this is the point where most folks became cognizant of computers and other digital technologies.  We saw images of huge computing machines on TV and in magazines.  Maybe you knew someone who worked for one of the big business data processors.  Science was still going strong in those days, so computers had made into pop culture.  But they were still out of reach for most folks.  And as far as our daily lives were concerned, everything was analog.

Work was all analog.  Filing systems, communications, and work processes were all based on the same analog way of thinking we had been using for centuries:  Everything takes up physical space.  You do one thing after another.  Math, in most cases, was performed by hand.  Communication was limited to speaking, typing, or morse code.  And was mostly done in real-time at best.  Automation came in the form of large mechanical machines offsetting physical labor.  The idea of Computers and Robots taking over jobs was seen mostly as science fiction.   However, in the world of science and government, some big things were happening.  Most important of all those was the introduction of Arpanet – which would be the foundation of what we would later call the Internet.  But again, none of this was in the public eye.

The 1970s brought the idea of digital technology further into the limelight.  We just didn’t know what it meant.  Calculators took off in popularity.  We started to see the word “Digital” in advertisements.  Cars started appearing with digital tuners. We started seeing digital clocks and wrist-watches.  Digital was becoming a “thing.”   But almost no one was making the connection between “Computers” and “Digital”  Computers were still relegated to these big boxes at work that some people used in business.  There were some hobbyists doing some very interesting things also, but computers were still an obscurity. That is until the advent of the Personal Computer. Apple famously released their Apple II computer.  And this would become the first step in the Digital Transition.  Personal computers quickly became a staple in many businesses.  Schools were introducing personal computers to their students.  We were starting to see personal computer ads on TV and in magazines.  Many people at least knew someone who either used a personal computer at work or had one in their home.   And on top of personal computer popularity, video games were catching on.  Many homes had Atari game consoles.  And while no one saw these as computers, they began to introduce us to a life of reliance on screens for things other than watching TV.

If you ask many folks, the point where computers started to really take off, most folks, who were paying attention at the time, would say 1981-1984.  The Apple II computer had been selling millions of units.  Other computer companies like Commodore and Texas Instruments had come out with their own systems.

Then the company, which was synonymous with big mainframe computers, jumped into the game.  IBM release their original IBM PC.   For those, still not on board with the personal computer, the PC added legitimacy to this new technology. Suddenly “Digital” had a whole new meaning.  Digital music, digital personal assistants, digital spreadsheets, digital learning, and word processing, took over the world.  Everywhere you looked, something was digitized.

But I want to point out a few things:  For the most part “digital” simply meant “better”  Digital Music meant cooler sounds and symphonies coming out of a little box.  Spreadsheets were basically accounting ledgers melded with calculators. Word Processors were very nice Typewriters.   We started seeing more automation in manufacturing, but things were still Analog in nature.  I can remember there being a controversy around “Robots taking jobs”  But it was nowhere close to “Jobs moving overseas”    So, while digital was everywhere, we were still, very much, an analog society.  Digital just made things faster and more convenient.

Perhaps, as big as the Personal Computer was, an even bigger digital influencer was a small box that one plugged into a computer: The Modem.  While the modem had been around for years, it really started gaining popularity in the ’80s. This little box allows computers to talk to each other over long distances.  And it would be responsible for what would be the 2nd step to the digital transition.

By the time the 1990s came around, Personal Computers were ubiquitous.   But there are 2 things, that complimented the Personal Computer which will launch or transition to digital, in earnest.

The Internet, even more than the Personal Computer, is probably the single biggest accelerant toward a complete transition to a digital society.    At the end of the 1980s, computer bulletin board systems (BBS) gained popularity.   These were programs, run on someone’s PC, to which other computers could connect.  In turn, all the connected computers could chat, share files and interact in other ways.  Some of these BBS grew immensely.   Systems like Prodigy and CompuServe would go on to be known as ways to communicate with others.

But one BBS would go on to become both famous and infamous in its popularity.  America Online (AOL) will always be known for sending out CD Roms to everyone in the mail.  I don’t know of anyone who had not run into it somewhere.  It was in the grocery store line. It was on TV.  It was in the schools.  It was everywhere.  AOL was known for its ease of use and its huge user base.  Alongside the AOL on swell was the emergence of the Internet.  The Internet grew out of the old Arpanet network and was initially limited to just military and university use.  In 1991 it was opened to the public.   However, in 1995 commercial restrictions were lifted, and we were off to the races.   It took only a few years for AOL to, at first, capitalize on The Internet, and then be eaten by it.  Suddenly, someone in New York was able to interact with someone from Berlin, just as easily as if they were next door.

The Internet, for the first time in history, connected the world in real time.  Most folks were able to connect in one way or another. (The idea of the financial digital divide, while related to this topic,  is a subject for another day)  The Internet, combined with the personal computer,  also started to change the way we do work.  Information creation and distribution went from the printed page and simple television broadcasts, to the transmission of the entire library of congress in just a few moments.  Manufacturing became more efficient and safe due to instant communication and knowledge sharing.  Management of remote teams actually became possible.  Research, across borders, became normal.  Companies like Google and Yahoo completely changed the way we looked for information. Research that would have taken weeks could now be done in minutes.  The idea of <<now>> was here.  And it had a profound effect that we wouldn’t really notice for years.

The next step in the Digital Transition came in the form of the digital cell phone.  We all had them.  While analog cellular phones had been around for years, the big bang would come with the digital phones.  The digital cell phone would be the device that would connect everyone, on a personal level, at all times.  Before the turn of the century, one could send text messages to anyone on the planet with a phone, one could download web pages without wires, and one could approximate their location on a map.  This will become huge in the next decade.

We’ve now arrived at the point where most of the base technologies have started to converge and take shape. The Personal Computer has supplanted other, traditional tools in business and entertainment.  The Internet almost completely obliterated traditional media and connected the world in ways not thought possible just 20 years prior.  And cellular phones have connected humans, on a personal level to others around the globe.  This century has really shown us adjusting to these new digital tools.

Social Media has taken on a bit of a bad reputation lately.  And it is really easy to jump on that bandwagon right now.  But, it is very easy to forget just what social media has done.  Sites like Facebook and Twitter have completely changed the way we communicate with the world.  The immediacy had been there, but the connections were not forged until these sites organized those connections.

So, here we are back to the present.  We have a society that is, for the most part, comfortable with technology.  We have a multitude of digital products at our disposal. We can literally carry most of the world’s knowledge in our hands.  Automation is finally starting to take a large role in our lives.  So many of us do our accounting through online software.  Fast-Food restaurants are using kiosks to take orders.  Self-driving cars are no longer relegated to things of science fiction. Customer support is becoming more and more automated with chatbots and automated voice assistants.  And incredibly, as a society, we become relatively comfortable with these things rather quickly.

But what does it all mean?  What happens now?  What happens as more and more things are automated and we need less and less human interaction.  What happens when automation can perform jobs better than we ever could?

This, my friends, is the Digital Transition.  So instead of asking only “What happens”  we need to have already answered that question and have started working on our game plan.   In My next post, I will attempt to add some clarity to our current situation.  I will also put up some ideas around how we can move forward.